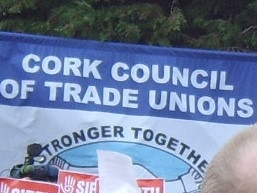 Monday 1st May 2017 will be celebrated internationally as Workers Day and the Cork Council of Trade Unions (CCTU) extends its greetings to all workers not just in Cork City and County but nationally and internationally.

The CCTU affiliated Unions, under the auspices of the Irish Congress of Trade Unions, continue to be instrumental in driving ONE Cork, which is a Trade Union Initiative developed to consolidate the movement in Cork in a collaborative fashion.

ONE Cork recently launched proposals to tackle the housing crisis titled “Housing our Communities”.  CCTU would have serious concerns with regards to Minister Simon Coveney's recent announcements on the use of state owned lands by private developers to supply housing. However, we would hope that the Minister recognises that the ONE Cork proposals offer an innovative and fiscally responsible approach to dealing with the current housing crisis and would include the proposals as part of his plans going forward.

The CCTU are also concerned by a recently publicised Central Statistics Office (CSO) report. Research carried out between April 2016 and December 2016 identified that 10.1% of employees are earning the statutory minimum wage (€9.25 per hour) or less. Over 54% of those surveyed were women which accounted for 84,400 respondents. One of the most worrying statistics revealed within said report outlined that the minimum wage was predominant in the Services Industry, where almost 82% of employees recorded that they were earning an amount equivalent to the minimum wage. It is a very concerning factor to the CCTU and to the Trade Union movement overall that employers within this sector continue to enjoy favourable VAT provisions from the Government but do not see fit to transpose such provisions to provide for increased wages for their dedicated employees.

The CCTU intend to support the upcoming ONE Cork “Living Wage” Campaign to ensure that terms and conditions of employment, particularly for low paid workers, are improved in line with economic recovery in society.