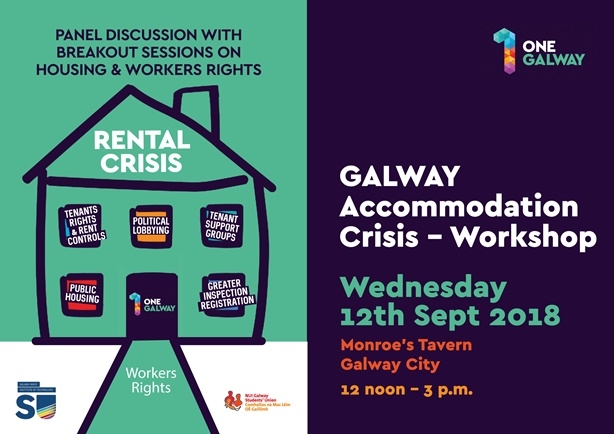 ONE Galway will kick-start a housing campaign on Tuesday 11th September with a campout (4pm – 10pm) on Eyre Square of students from both NUIG and GMIT supported by trade unionists followed by an Accommodation Crisis Workshopin Monroe's Tavern on Wednesday 12th September (12pm - 3pm).

But this is only the start of activities that will create solidarity amongst those hardest hit by the crisis.  ONE Galway will work on collecting hundreds of signatures demanding local politicians work harder to resolve it and lobby for changes in the regulation of the housing sector, along with addressing the need for structural changes to that sector.

Students will begin to pitch their tents on Eyre Square on Tuesday to highlight the severe, and almost unnoticed, impact and detrimental effect the shortage of adequate housing is having on them, their living standards, education and mental health.  This will be a demonstration of solidarity and a show of the strength of ONE Galway and the commitment to continue to campaign until something changes.  There will be banners, petitions and a bit of noise to ensure that these issues don’t continue to go unnoticed by those who can make the necessary positive changes.  It is important that the people of Galway see and hear first-hand the damage this crisis is causing to the next generation and the futures of our young population in what is supposedly a wonderfully “youthful and energetic” city.

“The campout is symbolic of the need for more purpose built student accommodation, tents by their nature provide very basic shelter and that is what students’ need, adequate safe and secure shelter, not luxurious apartments that are out of the reach of most people”, said Aaron Burke, President of the GMIT Student’s Union.

Students are also struggling to find accommodation that is suitable and more importantly “affordable” as Megan Reilly, President of NUI Galway Students’ Union went on to explain “We cannot stand by these luxury student accommodation providers taking advantage of the current crisis.  At this rate, people could be paying up to €1,250 per month for one room in one apartment; higher than most people’s monthly mortgage.  At the other end of the scale we have students who are living in hostels or commuting for several hours to go to college because they can’t afford to live in Galway”.

Affordability is having a real negative effect on students and their parents who are struggling to pay for it. One of the problems is that the chronic lack of purpose-built student accommodation is creating a knock-on effect to other groups with equally important needs for housing including young families, the elderly, young professionals or other vulnerable groups.  The shortage of supply is creating fertile ground for cruel exploitation and hiked up rents in a sector which is seen a profitable and for which the student population is paying a much higher price.

Whilst the Camp-out highlights the current challenges for students, the accommodation information and networking event scheduled for Wednesday 12th September in Monroe’s Tavern (12pm – 3pm) will provide students with much needed information, advice and supports to deal with the challenges they face.

Clement Shevlin from ONE GALWAY noted that “our movement feels that to really tackle the housing situation in Galway, we must develop a collective strategy and collaborative approach, where we are all moving in the same direction and are respectful and cognisant of the needs of all those impacted by this crisis.  The accommodation Seminar sets out to achieve this and also to ensure local politicians take note, so we are delighted that Mayor McNeilis has agreed to open this event for us”.

He added “this is where we will collectively voice our opinions to form one strong united campaign which will challenge the political establishment to act and act NOW.  We need to show them that we can no longer be ignored and demand strong action be taken immediately to address this crisis because remember there are elections in 2019 and we will be keen to show our support for those who supported the most vulnerable in our society”.