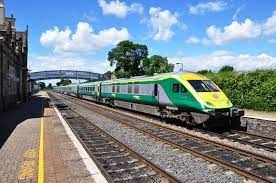 The WCTU representative on the Environmental, Climate Action and Biodiversity SPC of Waterford Council was successful in halting action to sever the potential rail connectivity for the South East region.

Whether local or global, according to the International Panel on Climate Change (IPCC) special report of October 2018, the impact of the climate crisis will be “...At the current-rate of increase, a 1.5 degree centigrade limit could be reached as soon as 2030”.  While it concludes that limiting the temperature to 1.5oC is scientifically possible, it would require an “unprecedented transition in all aspects of society including energy, land, urban and infrastructure, including transport and industrial systems by member states”.

Ireland has failed to reach its 2020 emissions target.  This failure incurs fines, and the necessity to purchase additional carbon credits, possibly totalling almost €250 million.  The realization of radical action will be required to meet our 2030 targets, and avoid future penalties.

The number of private cars in Ireland has increased almost 300% over the last 30 years.  The counties with the highest density of cars are those with the least public transport options.

Government policy that we should all transfer to private electric vehicles, which many can’t afford, may slow emissions, but is not comparable with public transport such as buses that can move tens of people or trains that can move hundreds.

Recognizing the importance of rail, with its massive reduction in emissions, its ability to move people comfortably, safely and sustainably, the EU has declared 2021 The Year of Rail.

It is against this background to which the demand for the re-activation of the Rosslare-Waterford rail line is made, and with it the potential for rail connectivity across the Southern region.

This strategic rail asset, with its Rosslare -Waterford link, mothballed, but with minimum ongoing maintenance since its closure in 2010, should not be allowed to be permanently closed.

WCTU’s representative on the Environmental, Climate Action & Biodiversity SPC of Waterford City and County Council (WCCC), raised this by way of a motion, calling for its inclusion in the forthcoming All Island Strategic Rail Review (SRR) announced in January by Minister for Transport, Eamonn Ryan.

The SPC, in line with WCCC policy, wrote to the Minister asking for the inclusion of the Rosslare - Waterford- Limerick link in the upcoming SRR.  It also wrote to the Wexford and Kilkenny Councils.

Plans by Wexford Co Council, for a Rosslare to Waterford Greenway that could displace the track, and sever the potential rail connectivity across the whole Southern region has subsequently been put on hold.

The recent report by the South East on Track (SEOT) volunteer rail group that campaigns for the reactivation of the line, has called for the inclusion of the line in the SRR, with a level of ongoing maintenance that prevents further deterioration, at least until the conclusion of the SRR.

The business case produced by SEOT, to which the WCTU has links, convincingly makes the case for the reactivation of the Wexford -Waterford rail link.

Their report is a comprehensive and detailed document, including financial costings, infrastructure upgrades, catchment area, passenger numbers, journeys times, ticket prices and comparisons with other modes of transport.  It makes the case for reviving the direct link between the two major urban centres of Wexford and Waterford, servicing Bellview and Rosslare ports.

SEOT has recently met with the Minister for Transport and his officials. The meeting considered the continuation of the current maintenance program and the inclusion of the Wexford-Waterford rail line in the SRR.

The Minister confirmed that the rail line will be included in the SRR, and that an improved maintenance scheme would be examined.  He also committed to examining the SEOT business case.

Local media coverage of the issue has on a number of occasions referred to the contribution made by the Waterford Council of Trade Unions.